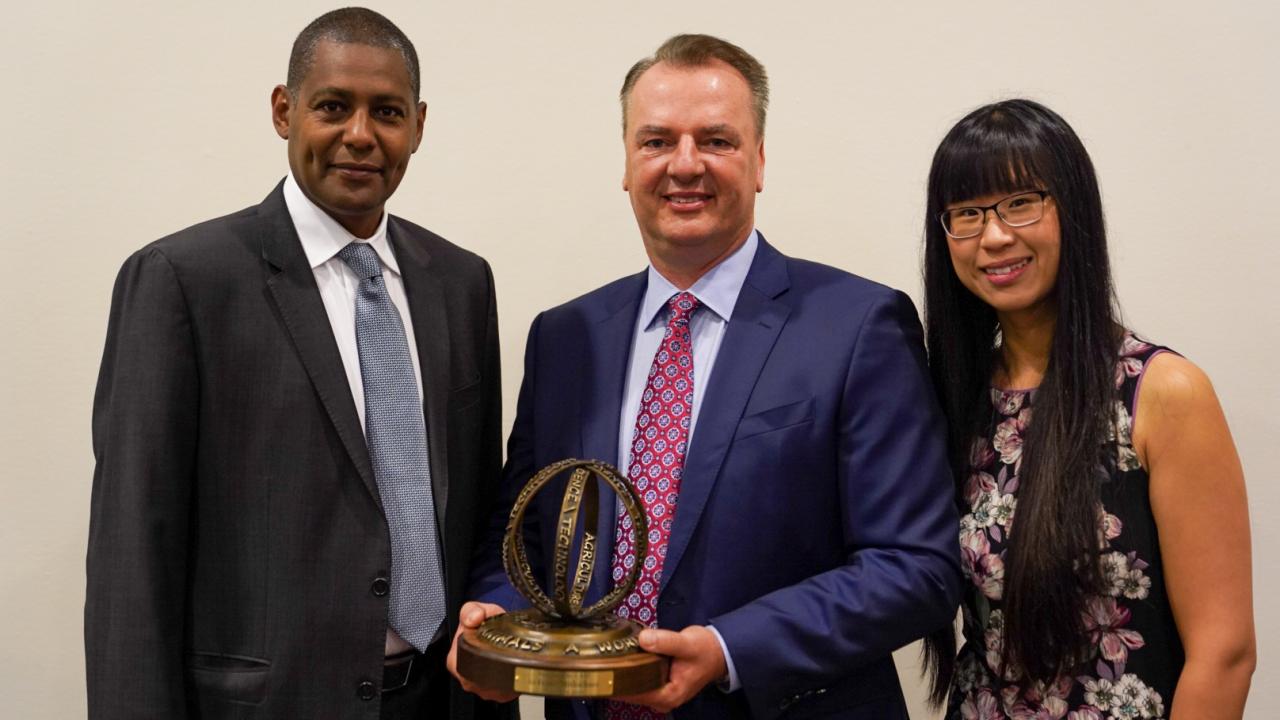 The Council for Agricultural Science and Technology, or CAST, presented its 2019 communication award to Frank Mitloehner, professor and air quality extension specialist in the Department of Animal Science on October 16, 2020 in Des Moines, Iowa.

He is UC Davis’ third recipient of the Borlaug CAST Communication Award in its 10-year history, following Alison Van Eenennaam in 2014 and Carl Winter in 2012. Van Eenennaam is a Cooperative Extension specialist in animal genomics and biotechnology, Department of Animal Science, and Winter is a Cooperative Extension specialist in food toxicology, and director of the FoodSafe Program, Department of Food Science and Technology.

The award, dedicated in part to Norman E. Borlaug, “The Man Who Fed the World” and author of CAST publication No. 1, is presented annually to a scientist, engineer, technologist or other professional in the agricultural, environmental or food sectors, for contributing to the advancement of science in the public policy arena, with primary consideration given to candidates who are actively engaged in promoting agriculture through research, teaching, extension or mass communication.

Mitloehner does all four in disseminating science-based evidence of the livestock industry’s true impact on climate — as when he corrected the U.N. Food and Agricultural Organization for its miscalculation, in a 2006 report, of the livestock sector’s greenhouse gas emissions. By overstating the emissions, Mitloehner said, the FAO had set people off on the wrong solutions — such as cutting back on meat and milk consumption — that would only stymie efforts to feed a growing world population.

“Being recognized with the Borlaug CAST Communication Award is not only a high honor, it’s an affirmation of the importance of sharing research and academic pursuits well beyond labs, classrooms and universities.”

Since he joined UC Davis in 2002, Mitloehner has given more than 800 presentations at conferences and meetings, and has contributed to news stories published by CNN, PBS, Newsweek, The Washington Post and other media outlets.

His @GHGGuru Twitter account has over 14,000 followers (GHG stands for “greenhouse gases”) and, late last year, he launched the GHG Guru Blog to deliver the “latest, most accurate research” focused on the intersection between animal agriculture and the climate.

“Science for science’s sake has no role in making our world more sustainable,” Mitloehner said. “Sharing what we know — and backing it up with facts — leads to discussions and solutions,” he said.

A version of this story was originally posted on UC Davis Dateline.