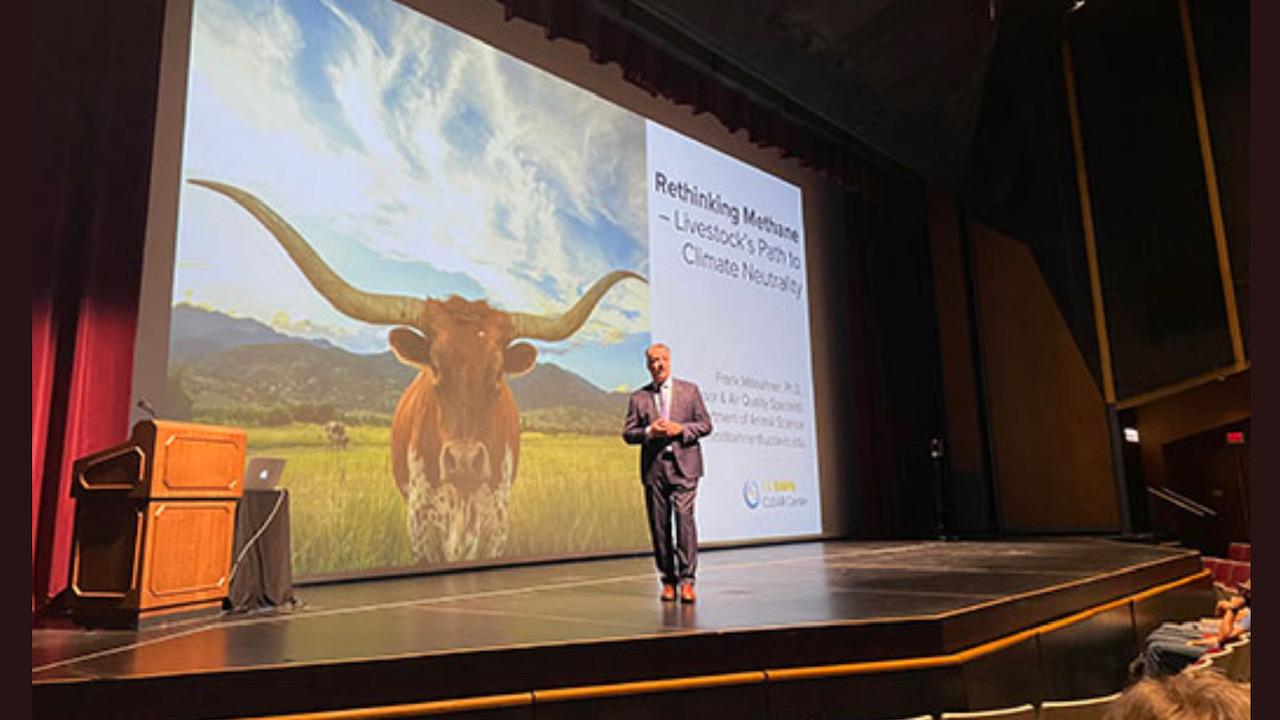 MANHATTAN, Kan. – A University of California-Davis professor who has spent nearly two decades studying the relationship between the livestock industry and air quality told a crowd of nearly 800 at Kansas State University Monday that agriculture can be a powerful part of the solution in reducing greenhouse gases in the atmosphere.

“Do not view methane as a liability. View it as an opportunity.” - Frank Mitloehner

Mitloehner, an air quality specialist in the UC-Davis Department of Animal Sciences, has conducted extensive research on the impact of livestock on the climate. Over 20 years, he said he has managed to use research data to inform public policy and on-farm management of greenhouse gases.

He said that greenhouse gases -- such as carbon dioxide – are known as stock gases because they are cumulative each time they are emitted into the atmosphere, such as every time you drive your car to work.

But when a gas such as methane – known as a flow gas – is emitted, it is stagnant and an equal amount of the gas is destroyed at the same rate that it is put into the atmosphere.

For that reason, he said, it is possible to reduce warming and other impacts to the climate by reducing the amount of methane produced.

As one example, a decade ago, there were approximately 25 million dairy cows in the United States. Today, there are about 9 million, and yet the country continues to produce the same amount of dairy products that it did with nearly three times fewer animals.

“We can do this in other parts (of the world),” Mitloehner said. “What is needed is a new Green Revolution. If we don’t do that, we will fail to meet the demand to feed 9.6 billion people by the year 2050.”

Mitloehner is one of the United States’ leading authorities on the topic. In 2002, he founded the CLEAR Center – Clarity and Leadership for Environmental Awareness and Research – at UC-Davis. In addition to conducting research, that group aims to communicate science clearly so that agricultural-related emissions can be understood within and outside of the industry.

He said when he earned his doctorate from Texas Tech in 2000, “my colleagues didn’t want me to use the ‘s’ word,” meaning sustainability.

“Rural America uses the term ‘stewardship’ while urban areas use the word ‘sustainability,’” Mitloehner said. “I ask farmers and ranchers, ‘would you say you are the best steward you can be?’ and of course they say they are…they want to take good care of the land, animals, products and the people who work for them.”

“Sustainability and stewardship are the same thing. If you want to communicate with the public, use the language they will understand.”

Earlier on Monday, Mitloehner met with students studying in K-State’s Global Food Systems Leadership program, explaining to them that although he studies an important agricultural topic, “I am not an advocate for ag.”

Mitloehner said the CLEAR Center’s research is communicated broadly. His team routinely writes a blog that covers livestock sustainability issues, and reaches up to 300,000 readers. A YouTube channel maintained by the Center regularly gets “hundreds of thousands” of views, he said, though a recent piece titled ‘Eating Less Meat Won’t Save the Planet’ was watched 2.5 million times.

“People in agriculture are really good at what they do, but we are not good communicators overall,” he said. “As a result, people who are critical of modern agriculture have stepped out and used their megaphone to critique agriculture and the practices we use today.”

“To me, it’s not just important to do research and to teach, but also to extend that knowledge. The entire agriculture industry needs to do a better job of communicating what we do and how we do it in a sustainable way.”

The lecture series is funded by the Gardiner family of Ashland, Kan. Henry C. Gardiner, who passed away just before the first lecture in 2015, was known as a visionary leader who dedicated his career to improving the beef industry through science and technology.