For methane, GWP100 not measuring up

Methane is a potent gas, packing 28 times the punch of carbon dioxide. But that sound bite fails to account for the gases’ behavior in the atmosphere. Comparing potency may be valid, but not at the expense of shedding light on warming effects.

In 1990, scientists established GWP100, a system meant to level set the global warming potential of greenhouse gases. Carbon dioxide has a score of 1; methane, 28; nitrous oxide, 265. In other words, methane is 28 times more potent than 1 kilo of carbon dioxide over 100 years.

Metric creators sought to standardize the impact of each greenhouse gas, allowing us to draw comparisons and get our arms around the behemoth of global warming. GWP100 became a well-known and easily digestible convention that’s even used to drive global warming policy and regulations. But the system simply measures methane’s carbon dioxide equivalence and overlooks how methane behaves in – and warms – the atmosphere. That’s a big miss.

Carbon dioxide, the most plentiful greenhouse gas, is a long-lived climate pollutant and a stock gas. It enters the atmosphere and stays there for centuries; conceivably forever, given a glut too vast to be absorbed by plants and carbon sinks. Mostly, it’s on a dead-end path to warming. 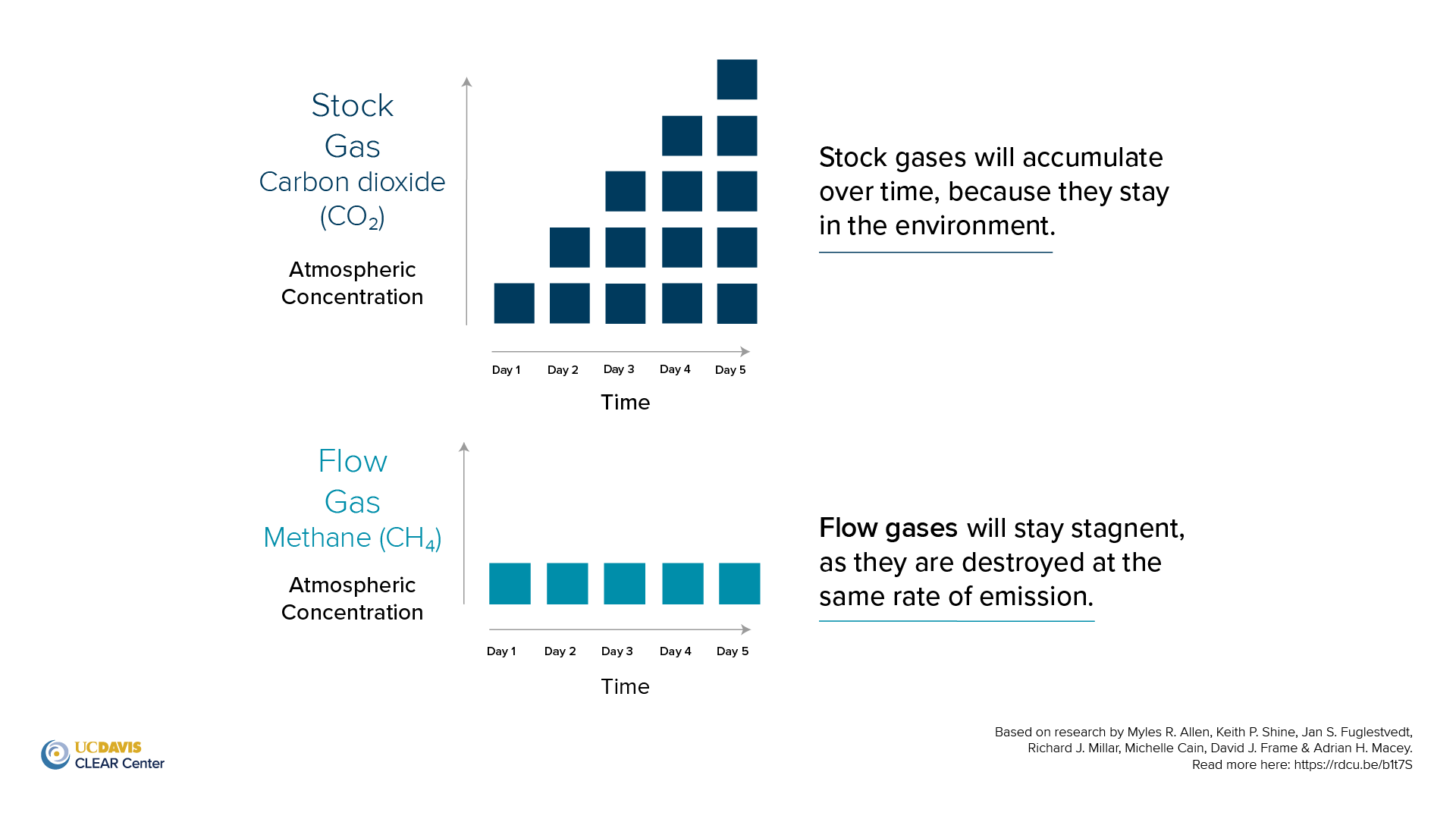 Conversely, methane is a short-lived climate pollutant that lasts a decade. Furthermore, when it comes from livestock, it’s part of the biogenic carbon cycle and isn’t adding new carbon to the current atmospheric stock. It starts when plants capture carbon dioxide from the atmosphere as part of photosynthesis, which is then consumed by cattle. They then belch methane, which enters the atmosphere and yes, warms at 28 times the rate of carbon dioxide. But only for 10 years. Then methane undergoes hydroxyl oxidation and becomes carbon dioxide and water vapor. The resulting carbon dioxide is recycled and returned to the atmosphere, ending methane’s warming. But there’s more to it. 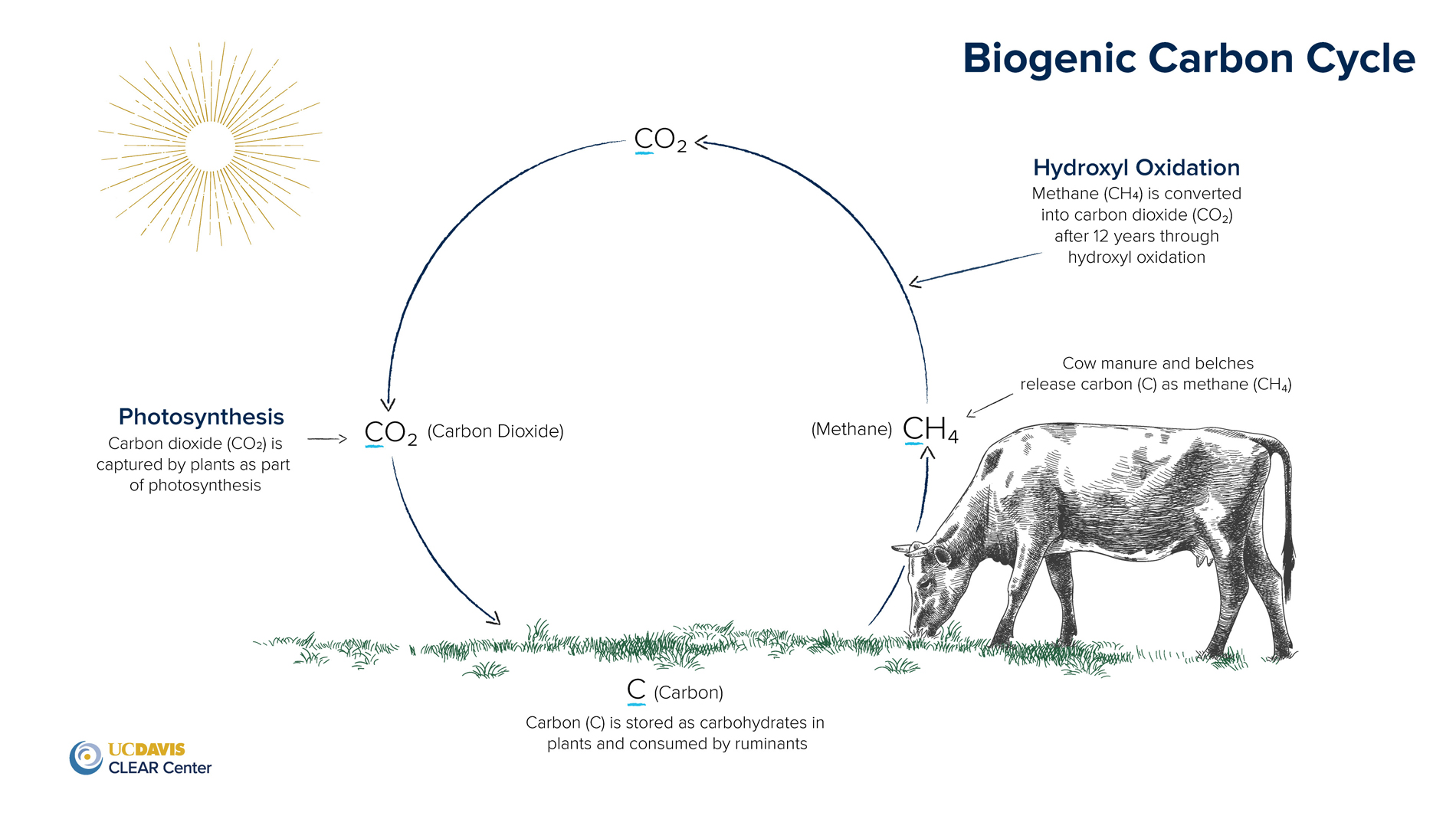 As a flow gas, methane is being destroyed as it’s being added. Its warming impact isn’t determined by how much is being emitted – since it’s destroyed relatively quickly – but by how much more or less methane is being emitted over a period of time. If a cattle herd emits the same amount of methane over 10 years, it’s contributing to warming for the first 10 years. Afterward, the amount being emitted is equal to what is being destroyed through oxidation. Consequently, warming is neutral if methane emissions stay constant. If herd emissions are reduced – and dietary supplements and digesters are pointing in that direction – there is a cooling effect that can offset other carbon emissions.

Armed with that knowledge, scientists at the University of Oxford are proposing an alternative to GWP100 to measure short-lived greenhouse gases; a metric called “GWP*.” Instead of measuring one methane pulse emission against a same-size pulse emission of carbon dioxide, it uses a more reliable approach that considers the differences in how short-lived climate pollutants and long-lived climate pollutants warm the atmosphere.

It’s an important element of climate change conversations and yet another reason the benefits of animal agriculture are not to be taken lightly.