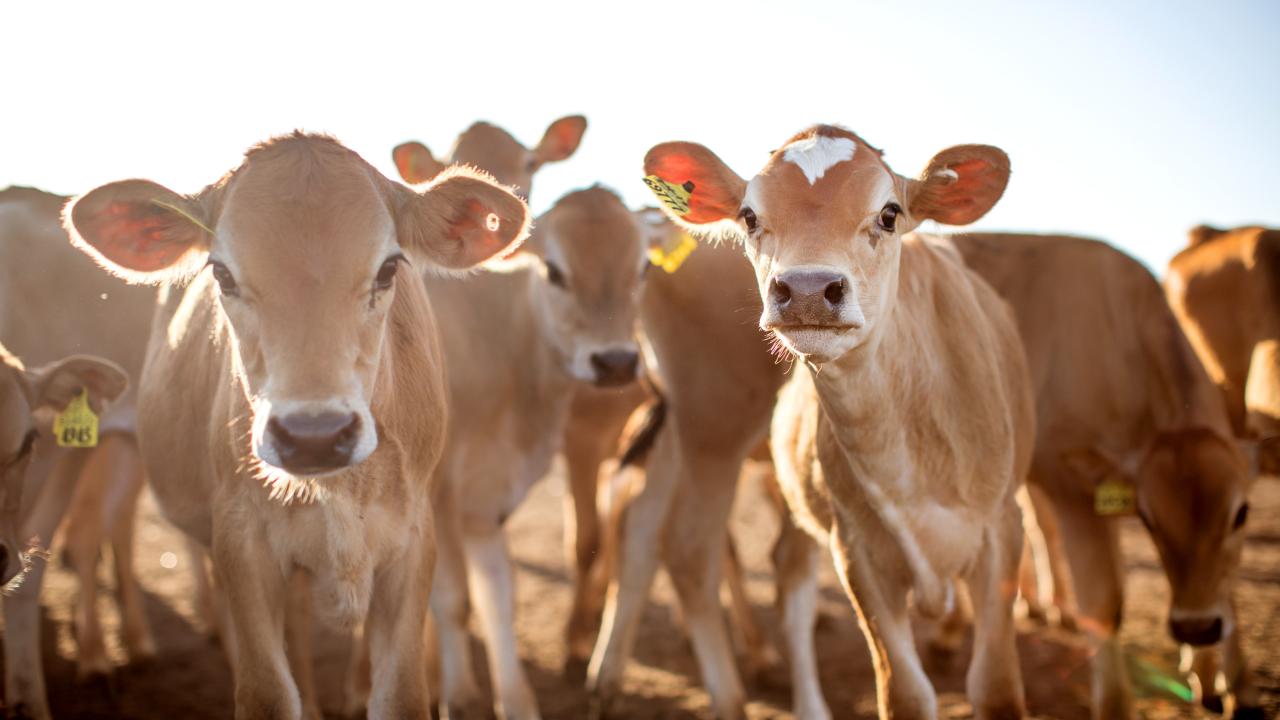 Defining a pathway to climate neutrality for US dairy cattle production

A new study from the CLEAR Center at the University of California, Davis and Elanco Animal Health outlines a path for the U.S. dairy industry to reach climate neutrality as soon as 2041. The study, published in the Journal of Dairy Science, leverages sustainable measures and innovations the US dairy industry has already been employing to battle climate change. The paper was written by Dr. Frank Mitloehner, Conor McCabe and Dr. Sara E. Place.

“Because methane breaks down in the atmosphere after about 12 years, methane is being destroyed in the atmosphere while it is also being emitted. As such, if methane emissions are stable for 12 years, what is emitted will nearly balance out with what is removed, and thus impacts on warming will be stable since concentrations of methane will not be increasing,” said Mitloehner. “Climate neutrality is a feasible goal for U.S. dairy, as methane is the main greenhouse gas associated with them. With continued emphasis on methane reductions, climate neutrality – and even beyond neutrality – is within reach for U.S. dairy the near future.”

Aiming for net-zero carbon is necessary to stop further climate warming by sectors primarily emitting carbon dioxide. However, sectors in which methane is the main greenhouse gas emitted need to reduce methane below baseline levels to reach a point at which they are no longer adding to warming. Such is the case for the U.S. dairy industry, where methane makes up 62% of its greenhouse gas emissions. Given the cattle sector’s large proportion of methane emissions, U.S. dairies can most effectively combat climate change by concentrating their efforts on climate neutrality and then continuing beyond to reduce historical warming.

Working toward climate neutrality also aligns with the goals specified by the Paris Agreement, an international treaty on climate change that aims to limit global warming to below 2 degrees Celsius. Unlike other climate agreements that outline their goals in terms of greenhouse gas emissions targets, the Paris Agreement focuses on measures that limit temperature change.

Thus, it is essential to quantify greenhouse gas emissions by how they impact temperature over time. However, when it comes to measuring greenhouse gas reductions, there are conflicting metrics that exist for the US dairy industry.

"The U.S. dairy industry has set an ambitious goal for achieving greenhouse gas neutrality by 2050; however, if the goal is meant to align with the Paris Climate Agreement, it's important to use metrics that are fit-for-purpose to connect emissions reductions to temperature responses," said Dr. Place.

The warming potential for greenhouse gasses is typically expressed as a metric called Global Warming Potential 100, or GWP100, which quantifies the warming potential of a gas over the course of 100 years relative to carbon dioxide. While this metric is appropriate for long-lived gasses such as carbon dioxide and nitrous oxide, it fails to account for the atmospheric removal of methane.

Recognizing this shortfall in the long-standing GWP100 system, the CLEAR Center and Dr. Place study evaluates data collected on dairy emissions via GWP star (GWP*), a newer metric developed at the University of Oxford.

“GWP* allows us to measure how greenhouse gas emissions are impacting temperature, not just how they compare to carbon dioxide,” said McCabe, a third-year doctoral student in Mitloehner’s lab. “If we’re concerned about warming, then we should be using a metric that measures warming when appropriate.”

GWP* serves as a fit-for-purpose metric to quantify the global temperature impacts of greenhouse gases and allows for agricultural sectors to plan for effective change. Thus, the study takes existing data and converts it according to GWP* to estimate the emissions reductions necessary for U.S. dairies to reach climate neutrality by 2050.

By making achievable reductions per year, the industry could potentially reach climate neutrality by the year 2041, according to a case study in the published paper. However, the path to climate neutrality is dependent on using accurate metric analysis and continued hard work to reduce overall methane emissions. Methane’s short lifespan and strong warming impact still demands immediate attention even after it is measured correctly. Case in point, GWP* shows that increases in methane emissions from the U.S. dairy sector over the past two decades has been underestimated by GWP100.

Fortunately, there is an abundance of innovative technology designed to tackle just that. Methane emitted from belching cows is being mitigated by new feed additives, which maximize an animal’s energy consumption and limit greenhouse gas emissions. Manure from livestock is another pain point for greenhouse gas emissions, but a host of new manure management techniques are combatting this. Anaerobic biogas digesters are one such strategy, along with alternative manure management plans such as composting, acidification and vermifiltration. By implementing strategies such as these, the U.S. dairy industry could reduce greenhouse gas emissions by an estimated 23% by 2050.

Although climate neutrality in the U.S. dairy sector is not the be-all and end-all to the problem of global warming, it is nevertheless an important endeavor. By using appropriate metrics such as GWP* to measure reductions, and by utilizing and incentivizing innovations to reduce greenhouse gas emissions, the industry is well on track to achieve climate neutrality by 2041.

To read the paper, visit the Journal of Dairy Science.