Ruminant animals, such as cattle, have four compartments that make up their stomachs – which rival your bathtub in volume. The largest of these compartments is the rumen, which is home to millions of microorganisms also known as microbes. Ruminant animals and rumen microbes maintain a relationship that is mutually beneficial to each – the rumen provides a perfect environment for the microbes to live in, meanwhile the microbes will break down the plant matter which is consumed by the animal into end products that are usable to the animal. This is done through a process known as fermentation. A class of microbes known as methanogens convert hydrogen and carbon dioxide into methane within the rumen – which is often referred to as enteric methane. Methane, however, is a powerful greenhouse gas that plays a critical role in climate change. Reducing methane production in ruminants will buy us time to reduce emissions from other sources and will also result in more energy for the animal.

How can Methane be Decreased with Animal Feed?

Generally, most people imagine cattle eating forages such as grasses and hays. These take a longer period of time to digest and ultimately lead to more methane produced when compared to readily fermentable concentrates such as corn or non-human edible byproducts. The quality of the feed and its ingredients plays an important role in the amount of methane produced by each individual animal. One of the simplest and classically used strategies for reducing methane production is simply changing to high-quality ingredients in the animal’s diet. Over the past few decades, beef and dairy cattle sectors have made substantial improvements in their carbon footprints as a result of the increase in knowledge about the nutritional quality of feeds and their effects on methane formation. A recent analysis of California’s dairy industry found that greenhouse gas emissions relating to dairy farm management were 57.7-59.2% lower in 2014 compared to 1964. They similarly, found the enteric methane emissions associated with the production of 1 kg of milk to be 54.1-55.7% lower in 2014 than in 1964.

But we need more methane reduction strategies to slow the progress of climate change and feed additives have increasingly been explored as a strategy to do so in ruminant animals. The effect that certain feed additives have on cattle changes from additive to additive. Although a few feed additives such as Agolin Ruminant are commercially available, most feed additives remain in research stages when it comes to reductions in methane.

In a broad sense, additives can be grouped under two broad categories: they can behave as methane inhibitors, or additives that block methane from forming, or as rumen fermentation modifiers, which are additives that change how a cow’s stomach process feed.

Methane inhibitors block, or inhibit, the formation of methane by a change in the structure or the function of key drivers of methane formation. Commonly known additives that fall under this umbrella include 3-nitrooxypropanol (3NOP) and the bromoform occurring/existing naturally in the red seaweed Asparagopsis taxiformis.

On the other hand, rumen fermentation modifiers instead lead to additional favorable changes in the rumen environment. In addition to decreasing methane formation, rumen fermentation modifiers may also improve animal productivity and health such as through increased availability of dietary protein for the animal. Essentially, a lot of protein and nitrogen is lost to the microbes in the rumen. Rumen modifiers help to “protect” the protein from use by less desirable microbes, thereby increasing the availability of this protein for the animal itself. These rumen modifiers can be both man-made such as ionophores, or naturally occurring compounds such as tannins and essential oils. 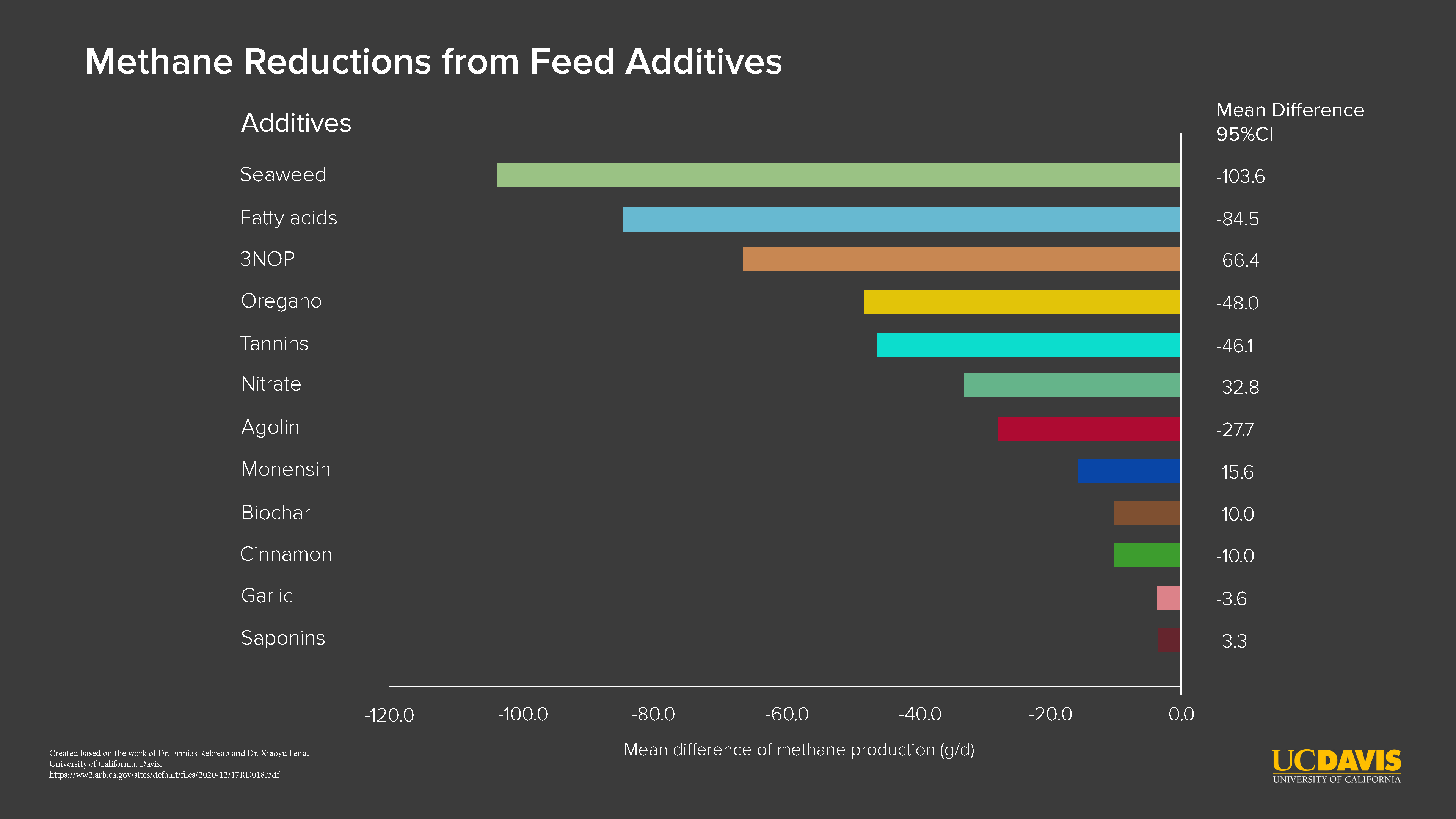 Red seaweed has sparked interest due to the tremendous potential as a feed additive that it has demonstrated. While other red seaweeds have been explored, A. taxiformis reduced methane emissions more than any other tested, without impacting the digestibility of forage. Numerous studies have been conducted with A. taxiformis as an additive and have found reduction in methane yield (methane production/kg of dry matter intake) of up to 55% in dairy cattle and up to 98% in beef cattle. Although researchers are still not sure exactly how A. taxiformis helps to reduce methane emissions, it has been found to naturally contain bromoform which is a known methane inhibitor. As a natural product, A. taxiformis also shows additional favorable properties which may improve animal production or health. While the benefits when fed to animals are evident, further investigation of red seaweed is necessary in order to determine if it can be harvested from the wild or farmed in a sustainable manner.

One of the feed additives currently being researched that stand out is 3-Nitrooxypropanol, as it was designed specifically to inhibit, or block, methane formation. This is accomplished by the additive specifically blocking one key event from occurring that is necessary for methane to be produced. 3-Nitrooxypropanol has been shown to decrease methane yield by up to 36% in dairy cattle and 50% in beef cattle. As a synthetic additive with the sole purpose of reducing methane emissions, one of the greatest hurdles 3NOP will face will be acceptance by producers and the consumer.

Tannins are a class of secondary metabolites of plants, meaning that they are not essential to the plant’s growth or reproduction but help protect the plant from herbivory. Tannins are known for their ability to bind to and denature proteins. When included within the diets of cattle this binding of proteins leads to reduced protein breakdown in the rumen by the microbes, leading to more protein broken down in the abomasum which is the acidic compartment stomach that functions to breakdown protein. In addition to this, some classes of tannins have also demonstrated potential for reducing enteric methane emissions by 13-16% in dairy cattle. When too much is added to feed, tannins can make it more difficult for cattle to digest the feed and even cause them to eat less, which can ultimately lead to lower animal performance.

Too much hydrogen in the rumen is a bad thing, and leads to reduced fermentation. Methanogens exist because they can uptake this hydrogen, producing methane in the process. One potential method for reducing methane emissions in ruminants is through the addition of nitrates to the animal’s diet. This is due to nitrates possessing a higher affinity for hydrogen than methanogens do.

Nitrates are naturally occurring chemicals found in a variety of sources including soil, plants and water. Nitrate supplementation has been found to reduce methane emissions by up to 16% in dairy and 12% in beef cattle. The downside to this is that nitrate can be converted to nitrite, which can be toxic to ruminants if the levels are too high or exposure is prolonged. The amount of nitrate in the diet would therefore need to be closely monitored in order to prevent the risk of toxicity.

Similar to tannins, essential oils are secondary plant metabolites which vary widely in structure and function. Known best for their antioxidant and immunological properties, key essential oils have also demonstrated the ability to reduce methane emission and to various aspects of improve animal health and performance. Though some essential oils seem to have favorable impacts when applied alone, essential oils appear to have an enhanced affect when offered as a blend of multiple essential oil components. Two essential oil blends of interest are Agolin and Mootral. Agolin is commercially available blend of coriander seed oil, and extracts from common nutmeg and wild carrot. When included within the ration of cattle, Agolin has demonstrated the ability to improve animal performance while reducing enteric methane emissions. A recent study at UC Davis and the CLEAR Center, found a 11% reduction in methane intensity (methane/productive output for the cow; methane production/kg of energy corrected milk) when dairy cows were fed 1g/head/day of Agolin. Other trials in which Agolin was fed found 6% reductions in methane production, and up to 20% reductions in methane intensity and notable increases in animal performance including milk yield. Mootral is another blend of essential oils comprised of garlic and citrus extracts. Though more research is needed, results have been favorable, demonstrating reduced methane yield 12 weeks after supplementation began.

The Future of Feed Additives

In the past few decades, the livestock sectors in the United States have reduced their carbon footprints tremendously. Though these accomplishments have been made, there remains room for further reductions. Candidate reduction strategies such as feed additives are explored and tested regularly, all with the overarching goal of developing a more sustainable food system. In order to reduce the environmental impacts while continuing to meet the dietary needs of high producing dairy and beef cattle, ongoing research and application is needed.

Angelica Carrazco is a Ph.D. student in the Mitloehner Lab at UC Davis. 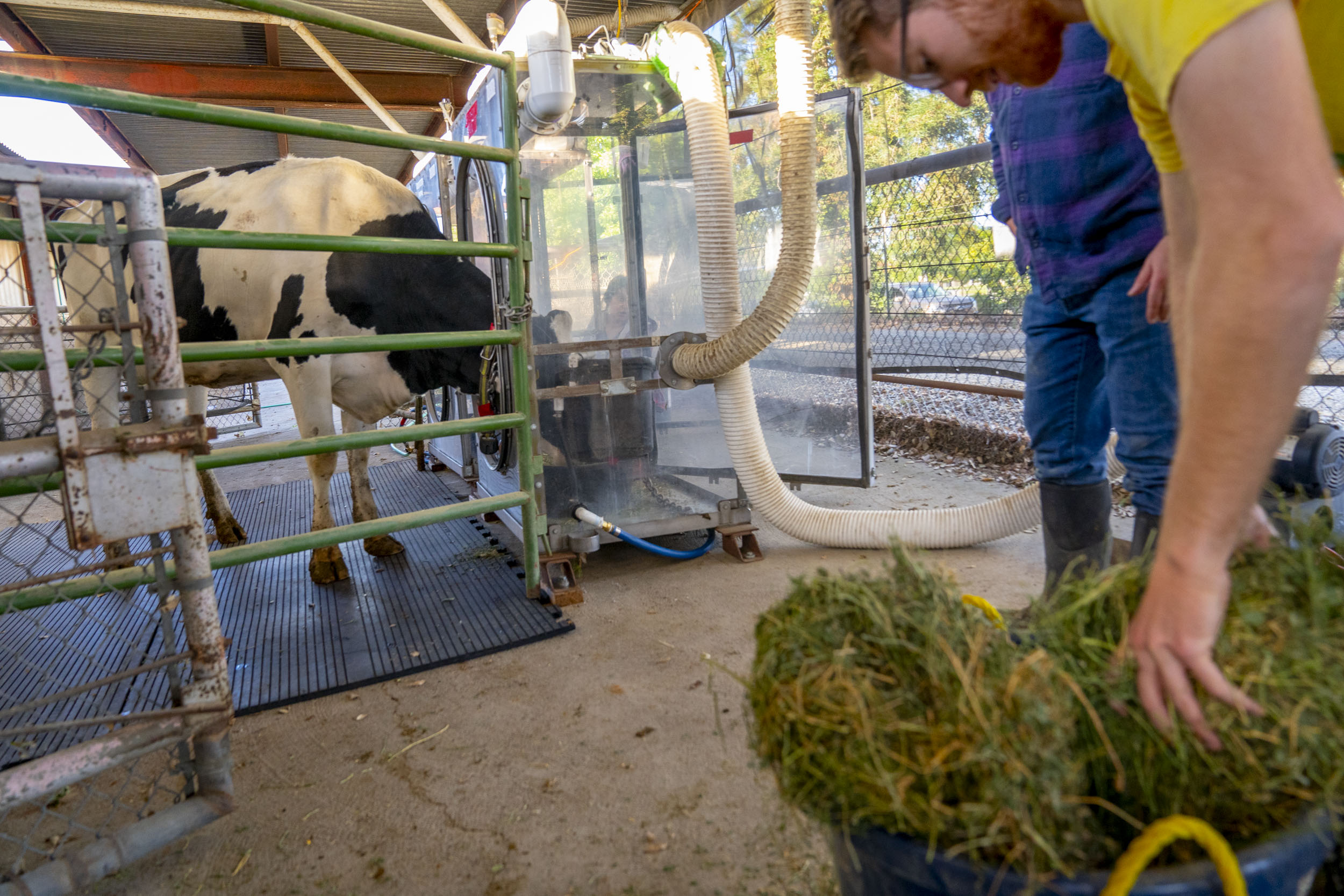 Could Agolin be a tool to fight climate change in dairy cattle?