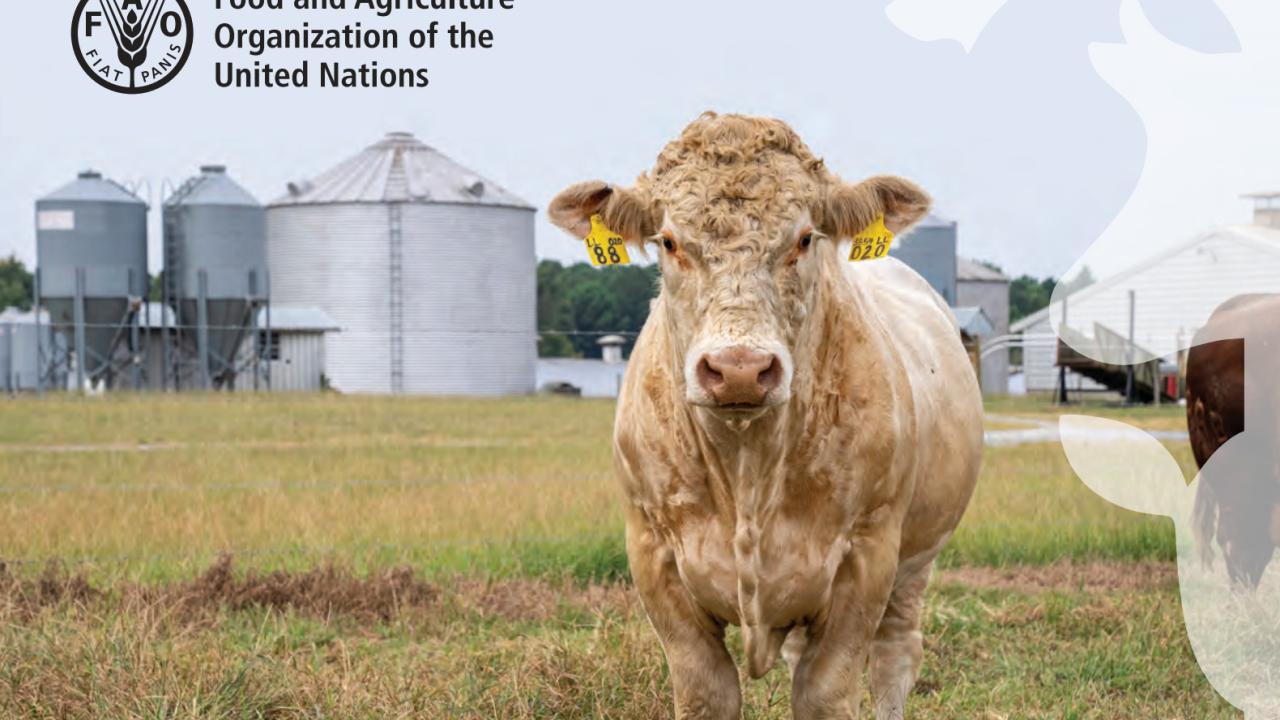 Focused on advancing global greenhouse gas mitigation strategies, international organization brings together 60 scientists from around the world to develop comprehensive report on methane, including emissions from livestock.

The United Nations estimates the world’s population will reach 9.7 billion people by 2050, with the greatest growth occurring in economically less developed countries and regions. Naturally, as the population rises, so will the demand for food. However, along with a population boom, the planet is knee-deep in a climate crisis, and there is a critical need to reduce greenhouse gas emissions before it’s too late.

Given the important role of livestock and rice in feeding a rapidly expanding global population, the FAO Livestock Environmental Assessment and Performance (LEAP) Partnership commissioned a study by 60 prominent, independent scientists. FAO’s report provides information necessary to advance policy work that will support and further national and worldwide climate actions. That is, to reduce methane emissions in livestock and rice systems in the context of the Global Methane Pledge to achieve Paris Agreement goals.

According to the UN’s Environment Program, agriculture is the leading contributor of atmospheric methane. One of the three primary greenhouse gases, methane enters the atmosphere from manure and gastroenteric releases, accounting for roughly 32% of anthropogenic methane emissions. Rice paddies are yet another major source of methane; flooded fields prevent oxygen from penetrating the soil, which allows methane-emitting microbes to thrive.

Given the importance and urgency of reducing emissions while we increase the food supply – two seemingly conflicting goals – the FAO’s end goal is to increase the global understanding of methane so that effective mitigation strategies can be developed and implemented. And yet, it’s not enough to simply reduce methane emissions. We need to do so in a way that allows for the production of more food, one of the most challenging conundrums of our time.

Focusing on livestock and rice

Livestock and rice are among the most common food sources worldwide, arguably in the top 10 with wheat and other popular items. Nutrient-dense products such as meat and dairy, and rice systems will be critical to food security and meeting nutritional needs now and in the years to come. In fact, we will require more of them.

However, their production is methane-intensive relative to other agriculture, so it’s not practical to simply ramp up production. Because while we need to feed more people, we also need to reduce methane emissions. In order to do so, we have to move away from business as usual.

Creating greater efficiencies that will lead to an overall reduction of methane is the ideal approach. By making the most of every input to the system, the agricultural sector will be able to harvest enough food to meet the nutritional needs of an unprecedented global population.

The technical advisory group for the FAO’s methane report was co-chaired by Ermias Kebreab, a University of California, Davis professor and associate dean of global engagement in the College of Agricultural & Environmental Sciences. It included Frank Mitloehner, a UC Davis professor and air quality specialist, who is also director of the UC Davis CLEAR Center.

Only by assessing impacts broadly can trade-offs be evaluated and managed. As a result, their methodology included measuring methane emissions from livestock over extended periods to account for daily and seasonal variations. These emissions were enteric (i.e., from ruminant animals’ eructation) and they came from manure primarily from ruminants and swine.

Underlying their work is an understanding that methane is one of the primary greenhouse gases, along with carbon dioxide and nitrous oxide. In the first decade after emission, it is a powerful compound that causes a high degree of warming. However, after approximately 12 years’ time, it behaves differently from carbon dioxide, the most plentiful greenhouse gas. It is nevertheless critical to reduce methane emissions across sectors.

In the United States, animal agriculture leads the world in efficiency. High-tech solutions such as feed additives and new manure-management practices (e.g., anaerobic digesters) are currently a focus of American farmers and ranchers. However, in most other countries, lower-tech improvements – such as improving mortality through better health care – can lead to a marked improvement in emissions and production. There is a body of best practices. Sharing knowledge and helping producers adopt solutions that are tailored to their needs and regions is a key to success.

Following are key takeaways of the report, as it pertains to methane from livestock.

The relationship between livestock and methane

All livestock emit methane, but ruminants are especially prolific in this regard, due to their distinctive digestive system. Research is currently underway, and more is needed, to determine safe and effective ways of reducing enteric methane emissions from ruminant animals. Among the many promising leads are synthetic inhibitors, seaweed, essential oils and tannins.

Methane is also released into the atmosphere from livestock’s manure. Anaerobic digestion, followed by biogas collection and utilization, is a relatively new and effective means of reducing these emissions. If manure is kept in a gas-tight structure, methane emissions from stored manure can be eliminated. There are at least eight other manure-management practices on the horizon, some of which are better suited to certain species.

Underlying the production strategies and implementation of technological breakthroughs is the need for accurate metrics to measure emissions so that progress can be gauged. A step-pulse metric (e.g., GWP*) is primarily used to show change in temperature over time relative to warming at a reference date caused by previous emissions. This metric is more suitable to measure methane’s impact on temperature, versus GWP100.

The reason for this is that methane behaves differently from carbon dioxide. For methane, net-zero emissions are not necessarily needed to stabilize its climate impact in the long term due to the decay of methane emissions in the atmosphere in roughly 12 years’ time.

Whereas carbon dioxide is a stock gas that accumulates in the atmosphere, methane from livestock is biogenic methane that cycles through the atmosphere. Thus, provided the methane emissions remain constant over time, no new additional warming will be added. Reducing methane emissions beyond stable, will lead to negative warming from methane emissions.  This fact sheds light on why it is so important to act now to increase efficiencies, as we will certainly need more output in the future to feed the growing population.

It’s also important to have cradle-to-grave life-cycle assessments to assess the potential for co-benefits or trade-offs as well as the best strategy for different regions and conditions. By taking a life-cycle perspective, we look beyond the reduction in methane emissions that might be achieved through different measures and consider wide, associated impacts.

Food waste is a major contributor to the greenhouse gas emissions of livestock and rice systems. In economically  developed regions, this occurs primarily at the consumption stage. In low-income areas, the loss often happens during production. Strategies should be developed to use some of the production waste as livestock feed in order to reduce methane emissions, eliminate waste and upcycle nutrients. In fact, the reduction and sustainable management of food waste is a fundamental tenet of the circular bioeconomy concept. However, relevant legislation varies greatly between continents and even between countries.

Global methane emissions can be offset by atmospheric and soil methane sinks. The most important soil sink for methane is upland soil, accounting for 6% of total methane consumption. Treed cropland has a higher sink capacity than untreed cropland because soil under trees typically has greater methane uptake. Carbon sequestered in the trees and shrubs of silvopastoral systems provides additional offsets.

Forests represent the largest methane soil sinks, followed by grazing lands. Among grazing lands, dry grazing lands in temperate and tropical climates have two to three times the uptake rate of moist grazing lands. Land degradation reduces the sink capacity, and restoration increases it, but at a slower rate. It is best not to degrade the land in the first place, but efforts to restore soils are nevertheless important.

Grazing management is an important mitigation strategy for greenhouse gas emissions. From improved forage quality leading to increased animal performance as well as the increase of the sequestration potential of healthy soils, it is a way to decrease methane in forage-based feed while still making use of marginal land. As a rule, heavy grazing intensity reduces sink capacity by 12%, compared to moderate or light grazing. However, adaptive multi-paddock grazing showed sink capacity of soil 50% higher than more continuous grazing.

Genetic engineering is another area of promise for methane mitigation because it is an inexpensive, permanent and cumulative strategy that is complementary to other strategies. However, it will take up-front work on large groups of animals to determine what lineages produce less methane and still have economically important traits.

Improved animal health typically increases production and feed efficiency. Adopting better health care strategies for animals is more likely to happen in high-income countries because of greater resources, but these strategies could be even more beneficial to lower-income countries. Feed efficiency has the potential to reduce absolute methane emissions, but switching from forage to cultivated fodder could result in increased carbon dioxide emissions that negate less warming.

Improved reproductive performance reduces the number of the herds’ unproductive animals that are emitting methane without providing food, and it lessens the need for replacement animals in a herd. In other words, it allows the same production of milk or meat with fewer animals, which lowers overall emissions, not just methane.

Policymakers may choose to set an individual goal for methane apart from other greenhouse gas emissions. For one thing, animal agriculture is different from other sectors because its primary greenhouse gas emissions are methane and nitrous oxide, plus reduction policies could have disastrous implications. As previously stated, demand for food is going to continue to increase, which means we will either have a food shortage, or reductions in one more efficient region could increase supply from less efficient regions, which could increase overall emissions, a phenomenon referred to as leakage.

A more cooperative approach, as allowed under the Paris agreement, would be to jointly report on mitigation activities of multiple countries that produce livestock but have large trade among themselves. This would be one approach to ensure that assessments include translocation of livestock emission sources across national boundaries.

But perhaps the only way to have a successful reduction of overall climate impacts is to approach the problem holistically. At the very least, we should separate long-lived (e.g., carbon dioxide) and short-lived (e.g., methane) greenhouse gas emissions in future targets.

The Paris Agreement does not specifically discuss methane nor does it prescribe how much and how quickly the emissions of individual gases must be reduced. One thing we know is that biogenic methane has an advantage over carbon dioxide. In the case of the latter, only net zero emissions will lead to climate stabilization, as any net emissions will add warming to the atmosphere.

Short-lived climate forcers, like methane, with an atmospheric lifetime in the order of about a decade or less, do not necessarily need to be reduced to net zero to achieve Paris Agreement goals. With methane, a modestly reducing emissions profile over time leads to methane-caused climate stabilization. More substantial methane emissions reductions provide a mechanism to lower the temperature, and thus may be an important contributor toward achieving the Paris temperature-reduction goal.

Mitigation strategies are crucial, and the time to research and implement them is now. We need all stakeholders to be part of the solution. Finally, we need our public servants on board to help us secure the funding, including producer incentives, to ensure successful strategies are adopted.