Methane is a potent greenhouse gas with a warming potential more than 28 times that of carbon dioxide (CO2). But when it comes to livestock and climate change, there are many other characteristics that set it apart from CO2. Here are an important four:

It should be noted that methane from fossil fuels doesn’t have all the same characteristics as biogenic methane – that is methane from ruminant animals such as cattle, or wetlands. Aside from its short life span, fossil methane shares more traits with CO2 from fossil fuels in how it warms our planet, since it’s not derived from atmospheric carbon (it’s pulled from the earth) and is new to the atmosphere. It’s worth noting that methane emissions from fossil fuel extraction have been severely underestimated.

Methane stays in our atmosphere for 12 years

Methane has a relatively short life of 12 years compared to the hundreds or even thousands of years that CO2 hangs around. After about 12 years, 80 to 89 percent of methane is removed by oxidation with tropical hydroxyl radicals (OH), a process referred to as hydroxyl oxidation. As a result of its short lifespan, methane is only significantly warming our atmosphere for those 12 years, which is why it is considered a short-lived climate pollutant (SLCP).

Its short lifespan is further relevant in regard to warming, because it means that as methane is being emitted it is also being destroyed in the atmosphere, making it a flow gas.

It should be pointed out that additional methane outside of that equilibrium – such as before reaching it or adding more after – warms at 28 times that of CO2, making it important we do not increase methane emissions.

But a really intriguing aspect of biogenic methane, is that if we are able to reduce it, such as with dairy digesters, then we can create a cooling effect since there is more methane being destroyed than emitted. These warming and cooling situations are considered in a new climate change matrix called GWP*, which better quantifies the warming effects of short-lived climate pollutants such as methane.

Methane is created from atmospheric CO2

The critical difference between biogenic methane and a fossil fuel greenhouse gas, is that methane from sources like cattle begin as CO2 that is already in the atmosphere. Gases that result from fossil fuel production begin deep in the earth, where they’ve been stored for millions of years, away from the atmosphere.

So how does CO2 become methane? Meet the biogenic carbon cycle

The cyclical nature of biogenic carbon starts with plants. Think back to your grade school years – what do plants need to grow?

As part of the biogenic carbon cycle, plants absorb carbon dioxide, and through the process of photosynthesis, they harness the energy of the sun to produce carbohydrates such as cellulose. Indigestible by humans, cellulose is a key feed ingredient for cattle and other ruminant animals. They are able to break it down in their rumens, taking the carbon that makes up the cellulose they consume and emitting a portion as methane, which is CH4 (note the carbon molecule). After about 12 years, the methane is converted into carbon dioxide through hydroxyl oxidation. That carbon is the same carbon that was in the air prior to being consumed by an animal. It is recycled carbon. 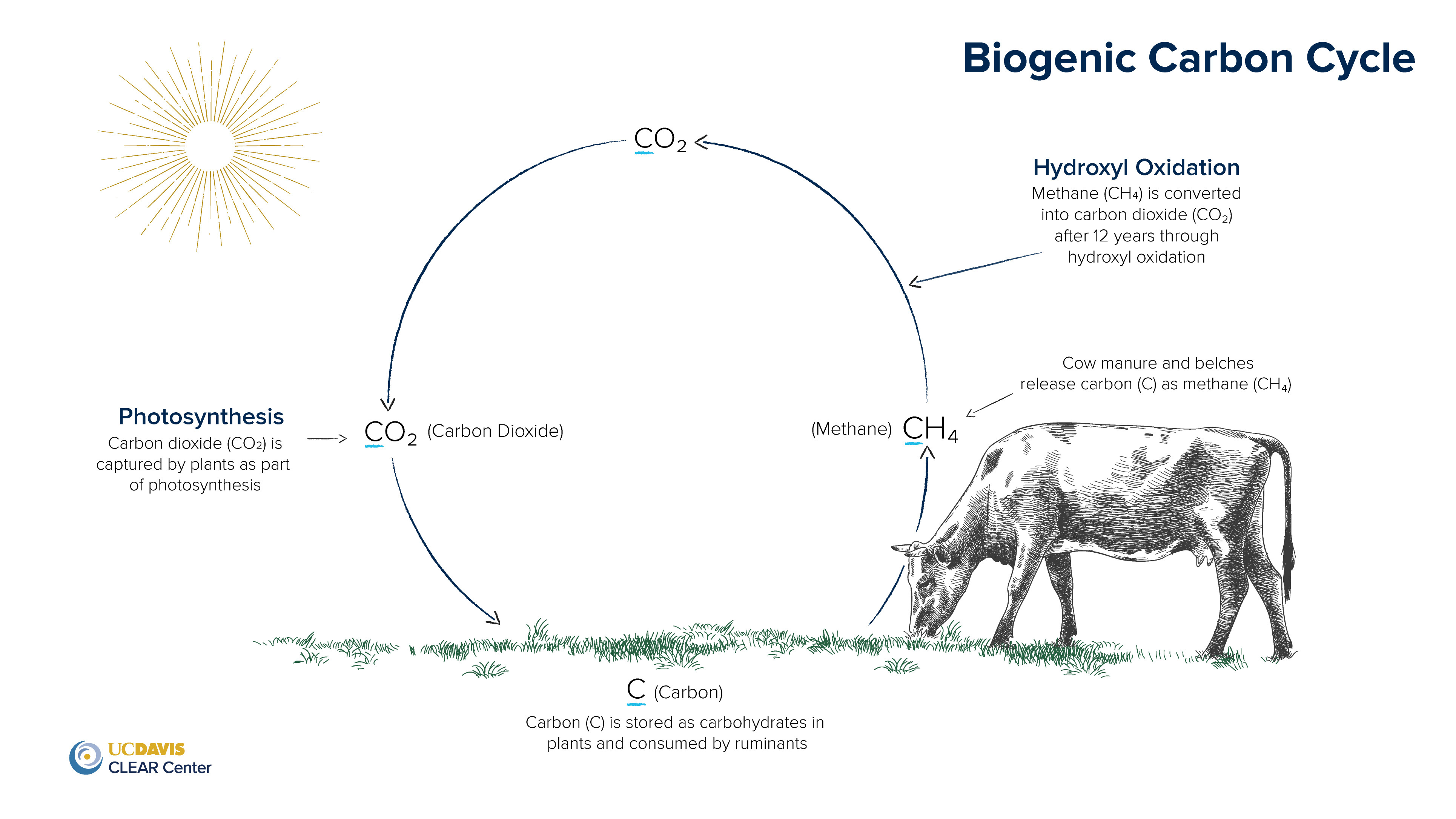 A quick note: while both biogenic and methane from fossil fuels are chemically identical, the resulting CO2 from oxidation has a different warming impact. The biogenic carbon from cattle and wetlands is returned to the atmosphere as that is where it started, while fossil carbon is brand new atmospheric carbon, and hence, new warming.

What does this difference mean?

The difference between biogenic methane and CO2 is significant when we talk about warming, which is ultimately what we care about when discussing greenhouse gases. The current standard for determining how greenhouse gases warm the planet, which is GWP100, doesn’t reflect the differing characteristics of methane and other short-lived climate pollutants from CO2 and long-lived climate pollutants.

If we really want to find climate solutions, then we need to accurately understand how various greenhouse gases actually warm the planet, because we may be missing opportunities to reduce global warming because we misunderstand the roles different greenhouse gases play in climate change. This isn’t to negate the value of GWP100, because it does a good job of representing CO2 and other long-lived climate pollutants, but it’s more productive to look at short-lived climate pollutants in a better way – in other words, having the right tool for the right job.

Check out this tweet from Dave Frame, who is one of the authors of GWP*: 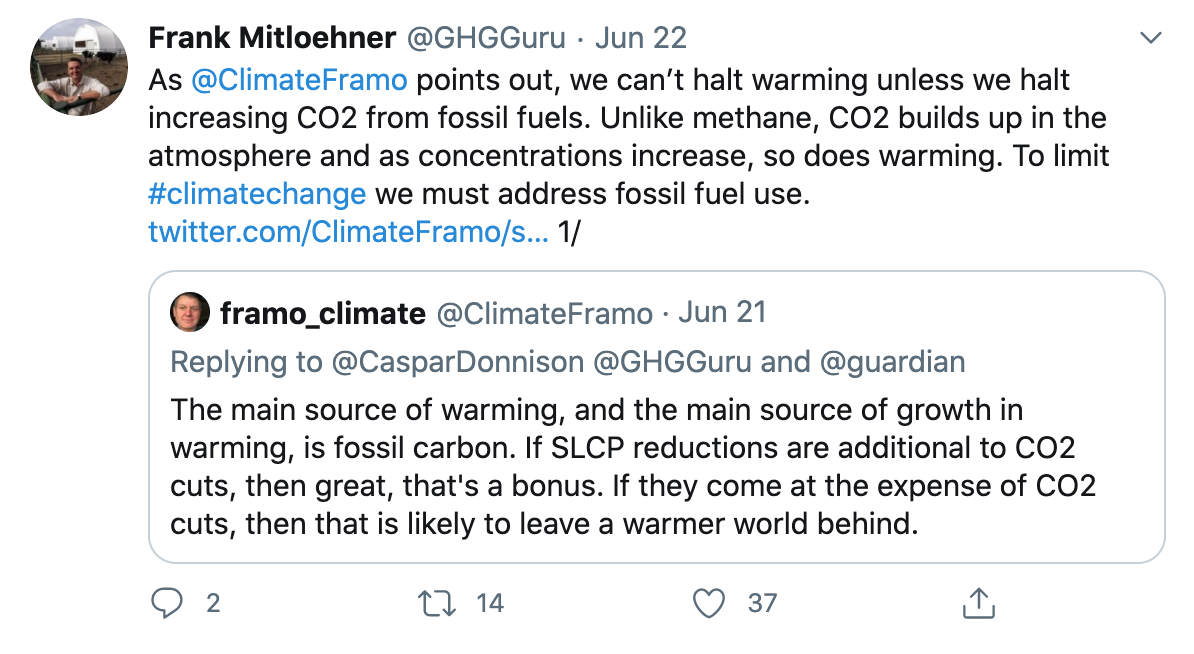 Dr. Frame points out that our efforts to reduce biogenic methane shouldn’t come at the expense of reducing CO2 from fossil fuels. If they do, then we’re likely to end up with a warmer climate, because the effects of a reduction of biogenic methane would be short lived as the emissions would balance out like mentioned above. On the other hand, CO2 would continue to build up in the atmosphere and warm.

Overall, it is worthwhile to reduce biogenic methane emissions from animal agriculture, as it can buy time for the global community to develop solutions that stop climate change. But we must consider how methane and other greenhouse gases actually warm the planet if we want to have long-lasting effects, otherwise we may nonetheless end up with a warmer planet.